I WAS BORN BELIEVING THAT “NO” DOESN’T EXIST 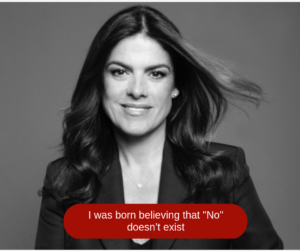 Joana Lemos began her extraordinary motorcycle racing career in 1990, at the age of 18. Two years later, she competed in the World Cup and rallies in Tunisia, Morocco, Dubai, Spain, among others. Later, she moved on to cars and won the 1997 Dakar Rally as well as the Ladies’ Cup. She was notably responsible for the winning bid for Lisbon to be the starting point of the Dakar Rally in 2005. Journalist Josefina Raimundo, describes Joana as ‘The Desert Princess’ in her book.

However, her career was not limited to sports competitions. She was a journalist who wrote special reports of the Dakar Rally in 2009 and 2010. From her early years, she gave support to various projects for solidarity, social institutions and helping those most in need. Holding an MBA from the European School of Economics, Joana is now the administrator and Head Financial Advisor of Maude Queiroz Pereira’s Family Office. She is rapidly becoming a top business woman in Portugal.

Start from scratch and do everything you can

Joana felt privileged in a way because she is a woman. She started riding motorcycles very early, then driving cars. She quickly developed the taste for competition. People thought it was interesting to see her competing, as she was one of the few women doing this in Portugal at the time.

The fact that she publicly said this, did sometimes make more hardcore feminists actually ignore her. Nevertheless, she continued being a total supporter of having men and women in all types of positions. Starting from scratch, it was crucial to do everything when she was very young. She climbed from the bottom of the ladder and that is how her business started.

Don’t take no for an answer

The most important piece of advice Joana learnt throughout her career was from her family who made her believe that ‘no’ doesn’t exist. She says, “When I am told that something isn’t possible, that is when I feel a huge boost and I feel that I need to prove that it actually is possible.”

She loves these challenges. A great example of one of these challenges was in 1997, when she was 24 years old. She had the idea of changing the starting point of the Dakar Rally to Lisbon, making it Lisbon-Dakar instead of Paris-Dakar. At the time, everyone obviously thought she was crazy, a young woman trying to do something radically different against all sorts of lobbies. Eight years later, she proved them all wrong and did the impossible.

Be persistent, don’t take no for an answer, get your foot in the door, even if it seems closed and reach out to all sorts of people. Even if you have to wait hours to get to the entrance, to get a meeting with someone that is crucial in what you want to accomplish, it is definitely worth it. This is Joana’s strategy.

Put things into perspective and focus on what really matters for you and for the world out there.

When Joana was riding motorcycles in the Dakar Rally, she was confronted with many things that ended up giving her some perspective on life. She tells the story of how she witnessed people dying right beside her. A competitor was riding next to her in one of the dunes in the desert. He felt dehydrated and moments later, he died just like that. She stopped but there was nothing she could do in the middle of the desert other than carry on. These events were so radically dramatic.

Having developed resilience, courage and the inner strength through all these mental and physical battles, Joana created the capacity to put things into perspective and focus on what is essential. Help and make something good for others, keep focused on your core ethical values. She found it very hard to get back to the real world after all these experiences in the desert, realising how privileged, how spoilt we are in our European cozy lives. That is why she continues to fight for change. Indeed, she is currently working on several projects where she is involved in giving back, helping vulnerable populations, elderly people and younger women.

Today she says, “Here I am. Knowing what I achieved and showing what a woman could do, I hope I have been an incentive and a role model for other women. This is my biggest motivation, to think that what I do, can actually have a positive impact for others.”