Women’s Day 2018 took place 100 years after years after some of the accomplishments of the courageous pioneer-women we call suffragettes: in 1918, following years of bitter struggle, (some) of the UK’s women finally gained the right to vote. We have come a long way since those times. Our lives today – in the privileged Western societies we live in – are very different from those of our great-grandmothers and fathers. I am grateful to all those who came before us – the women who made huge sacrifices to demand basic human rights and the men who supported them. These are the brave people who opened the way for us to enjoy the rights and privileges we have today. However, as we all know, gender equality and coming to terms with a real balance remains an unfinished business – and progress towards gender equality in the 21st century is happening at a snail’s pace.

Today’s world is moving at a breakneck speed and there is no more space for business as usual. The 21st century’s 4th industrial revolution is a V.U.C.A. world – volatile, unpredictable, complex, ambiguous. Change is the new normal and it affects every single human being on our planet. I cannot but be amazed with our contemporary reality – how we experience three centuries co-existing during our small life-spans. We have 19th and 20th century institutions, rules, gender roles and mentalities. At the same time, we have 21st century technological development moving faster than we can grasp: Artificial Intelligence, automation, genetics…I am Portuguese, I was raised with the stories and tales of the navigators who sailed new waters 500 years ago. Those (hand drawn) world maps depicted small areas of known “worlds” and massive amounts of mysterious territories, with sea serpents, dragons and multiple creatures symbolizing the threats and the challenges, but also the possible treasures and rewards for the brave ones who would overcome the monsters. Today’s world reminds me of those charts, because we too are navigating “uncharted territory”. This is a time where old certainties and deep-rooted balances are dissolving while the new balances are not yet a reality.

As we speak, we observe multiple trends emerging around us, affecting women and men in multiple manners; Accelerating technological progresses and hyper-connectivity, the changing nature of work, geopolitical axes of power moving towards countries with poor track-records of democratic and environmental standards, among others. Some of these trends are frightening – e.g. in less than 15 years, the world’s population is estimated to reach 8.5 billion. This means additional pressure on a planet whose resources are already under stress – water, food, energy, our collective environmental sustainability. It also means increased inequalities, more social pressures, increased tensions and potential conflicts, refugees’ crises, more populism and new security threats adding to those we know already.Troublesome are also the democratic setbacks we observe throughout the world: the revival of toxic authoritarian alpha-male power models, booming populist drifts; the fake news (post-truth) era, widespread regressions in terms of individual and collective freedoms and human rights standards, pervasive women’s rights abuse and sexual harassment.But there are equally positive facts and trends – and each challenge provides new opportunities. We have more education, more rights and protective legislation than ever. There is a more balanced financial and decision power-sharing among men and women than history has ever witnessed. In broader societal terms, new technologies, digitalization and the widespread use of social media is also affecting power dynamics. Influence through social media is impacting how women (and men) access and use power – for example, in bottom-up ways as we have witnessed with the #MeToo movement. And, as the world changes and contradictory trends unfold, we are gradually seeing alternative power paradigms and more conscious and inclusive women and men leaders. These men and women – we! – are the new pioneers and continue opening the way for true equality to happen, step by step.

Powerfully human and balanced in the 21st century

Awareness is growing that – to face the massive challenges ahead – we need new thinking and all the talent we can get. This means women and men of different origins, including the 60% of university graduates who are women. These talents are fundamental so our companies, societies and countries can prepare, adapt, and collectively survive in the coming century.Without pigeon-holing women and men, nor creating monolithic gender boxes, we need to acknowledge the weight of thousands of years of social construction around gender roles, stereotypes and behavior that we all carry – individual and collectively. Today’s disruption allows us to (finally!) understand and value the importance of the so-called “feminine” abilities: the ability to create communities, compromise and lead with agility and emotional intelligence.In a new world dominated by machines and algorithms, these qualities are those who will allow us to remain powerfully human, to create collective Meaning in an ever-changing environment and not become obsolete. As Jack Ma, the founder of one of the world’s biggest companies (the Chinese Alibaba) said: “The ‘market’ for emotional intelligence is expected to grow, as this is an area where robots are not likely to dominate.”For all these reasons, decision-makers, companies and institutions are slowly understanding that to become – or remain–  prosperous in the 21st century, they need to learn the key leadership skill of inclusion and be able to get the best talents and the array of diverse skills and talents brought by men and women. 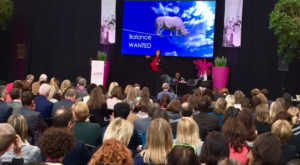