There are more women Law graduates than men in all EU member states. Nonetheless, women remain underrepresented among practicing Lawyers & in leadership. 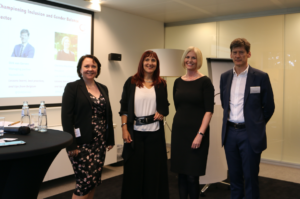 As a step for awareness and change, on the 7th of June2019, REDSCOPE co-organised a panel discussion entitled -LEADERSHIP, WO.MEN & LAW IN THE 21ST CENTURY- in partnership with the President of the Law Society for England and Wales, Christina Blacklaws, and the Managing Partner of law firm NautaDutilh, Dirk van Gerven. The goal was to exchange the Leadership styles that are necessary for 21st century Law firms, ideas on how to co-create an inclusive workplace culture, best practices and encourage new ideas on how women can be empowered in the Law sector.

According to Catalyst 2018, in France; 50% of all lawyers are women, but no woman has ever served as permanent judge in international courts. In the UK,  33% of partners at all firms are women and only 18% at the top 10 firms. In Germany, 56% of law graduates are women and less than 10% are women at management and partner levels.

The law sector remains one of the most conservative and gender unbalanced, where the percentage of women at the EU’s biggest law firms has grown in 20 years, but progress is slow. In 2016, only 19.5% of partners in the EU 100 top firms were women. While, there is no firms with a majority female partnership. So, why does progress remain slow?

Starting the conversation; speaking about her experience over 15 years of a business case for gender balance, Claudia de Castro Caldeirinha shared some common reasons for slow progress:

“It’s 2019 and we are still light years away from gender equality in all sectors. Despite progress over the past years, much more needs to be done to promote and forward equality between women and men.” she said.

“Men should understand that things need to change. Very few men really understand that, they speak a lot about diversity and about the initiative but when we look at how they are organised and how they deal with it then you see that a lot of men don’t really believe that the need to change is relevant.” Dirk Van Gerven said.

For Christina Blacklaws, Law Society President, “This is a change management issue, diversity and inclusion must be mainstreamed into the business plan, and investments must be made andpolicies put in place to move it forward. Just like any other business area.”

The panel discussion concluded that  today’s VUCA world needs all talents: male and female, of all profiles. There are no quick fixes or ‘one formula fits all’, and systemic change doesn’t happen overnight – it requires determination, vision, resilience and courageous change-makers.