March has become Women’s Month, with the 8th as the pinnacle of celebrations, stock-taking, and multiple debates & actions. We have come a long way, and also still have a very long way to go, to move towards equality for men and women at work, within the family, socially, etc.

Below, you will find interesting articles, a Survey, and inspiration. We hope this special feature will help up exploring some of the fascinating facets, challenges and opportunities for wo.men in the digital age we live in. Happy March to all!

Only six countries in the world give equal legal work rights

If you’re a woman and want to be on an equal footing with men, it is best to live and work in Belgium, Denmark, France, Latvia, Luxembourg or Sweden. These are the only 6 countries in the world to enshrine gender equality in laws affecting work. And even there, implementation remains “unfinished business”.

These are the conclusions of the World Bank’s women, business and the law 2019 report, which tracked legal changes for the past decade and measured gender discrimination in 187 countries. Unequal pay is a major stumbling block, said World Bank CEO Georgieva – “The global economy could be enriched by about $160tn (£120tn) if women earned as much as men. (…) It is clear that giving space to women leads to richer societies”.

More than 30 female world leaders warn about the decline of multilateralism, the danger of populist “macho-type strongmen”, and called for a fightback against this erosion of women’s hard-won rights.

The Group of Women Leaders for Change and Inclusion includes Helen Clark (former prime minister of New Zealand); Sahle-Work Zewde (Ethiopian president); Mary Robinson (former Irish president); Christiana Figueres (former executive secretary of the UN convention on climate change); and Susana Malcorra (former Argentinian Foreign Minister). “The space that we collectively occupy as women leaders (…) was not opened up easily and can never be taken for granted. It is the result of the sacrifices and struggles, of generations of women. 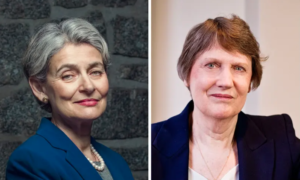 “Political forces today threaten to erode the progress that we have made at both the national level and through landmark global agendas. Whether those forces succeed will depend on whether the women leaders and advocates of today and tomorrow and all who stand with them recognize the urgency and peril but also the opportunity of this current moment and act accordingly.”

1. A growing gap between men and women’s participation in the digital sector in education, career and entrepreneurship.

2. Women owned start-ups are more likely to be successful, but there is decrease in participation, leadership and investment in the entrepreneurial digital sector.

3. The annual productivity loss for the EU economy (of women leaving their digital jobs to become inactive) is calculated to be about EUR 16.2 billion. 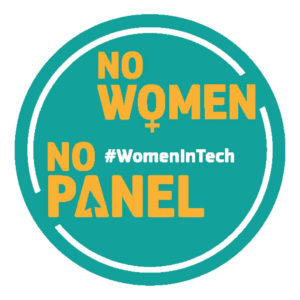 Some of the EC’s Action-Areas:

No Women No Panel – An EC campaign to raise awareness on gender balance in panels and public events.

Women in Digital EU Country Scorecards to assess EU countries’ performance in the areas of women inclusion in digital jobs, careers and entrepreneurship. Check your country for surprises…

What role for Europe in the Digital Age?

“What the future will hold for all of us – including the 50% of Europe (and of humanity) who are women – depends on which policies are done today to bridge the gender digital divide.” 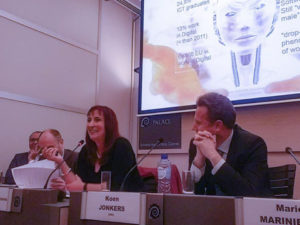 “What is at stake is not just women’s ability to seize the opportunities offered by the digital revolution, but also its consequences for Europe and for today’s interconnected world economies”, said Claudia at the recent debate organised by the European University Institute’s(EUI) Alumni Association, in Brussels. Read more

At the EU Industry Week 2019, Claudia recalled that 4 billion people in the world are still excluded from digital – and women are a majority of these. Pointing concrete suggestions to move towards inclusive digital -Awareness and skill-building Training, reform of the early and secondary Education systems (re-trained teachers, etc), Life-long Learning, Mentoring, active and visible role models, adequate funding and VC for women start-uppers, etc.- Claudia concluded: “Digital is no longer an option: to remain competitive, Europe needs to accelerate gender equality, digital competence, public-private alliances, and inclusive leadership”.

SHARE YOUR VOICE: Empowering women for the digital future

The digital disruption is impacting us all and re-shaping the job market. What’s the impact on women? How do women feel about it? If you are a professional woman, please take 10m to be part of this ground-breaking survey we have co-created with JUMP and a Steering Committee of Digital experts.

At Nevertheless you can find nice Podcasts and multiple resources to download and print out (for your workplace, your kids schools, etc). This is one of our favorites: all the women featured in the poster below serve as powerful role models in the fields of science, technology, engineering, and mathematics (STEM).

By making these visible, you will help raise awareness of their achievements, and hopefully inspire a new generation of women working in STEM. 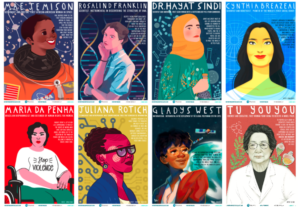 For the 3rd consecutive year, REDSCOPE is very happy to support and contribute to the JUMP Forum!

This year, it will be dedicated to Digital transformation: How to turn risk into opportunity for gender equality. Claudia will facilitate the 1st conference on “The digital age : a man’s world? How to embark women in the revolution?” with an exciting group of panelists: Pascale Vandamme (VP & GM Dell EMC, Belux), Rik Vera (Nexxworks), Elke Jorens (Microsoft), Céline Parsoud (Gender Buster) and Fredéric Bardeau (Simplon.co).

Don’t miss this and much, much more!

…AND OUR WO.MEN, LEADERSHIP & LAW EVENT

In partnership with the President of the Law Society for England and Wales, Christina Blacklaws, and the Managing Partner of the law firm NautaDutilh, Dirk van Gerven, REDSCOPE is co-organising an interactive debate focusing on the type of Leadership necessary for the 21st century Law firms, and how men and women in the profession can co-create the workplace culture’s transformation that needs to happen for their companies to survive and thrive in today’s inter-connected and volatile world. Stay tuned!

Participation is by invitation only, but feel free to apply for a seat if you are in the Law sector.

Have a lovely Day & Month!
Claudia de Castro Caldeirinha & the Redscope Team
#TogetherWeAreStronger
Should you like our work and mission, please spread the word.