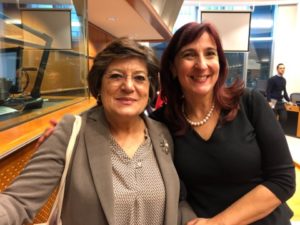 Despite some progress made over the last decades, women’s participation in politics remains a challenge. Across Europe, women are still under-represented in political decision-making, especially at the highest levels.  Factually, according to EIGE’s data (2018) on women and men in decision-making positions, women’s ownership among leadership positions in European Member states varies from 46.1% (Sweden) to 9.5% (Hungary). Indeed, the picture in the European Parliament tells a similar story.

Women politicians often end up with the “softer” portfolios such as family affairs, education, health and culture, while men tend to get assigned to “harder” subjects, such as economics, technology, defence. While reinforcing traditional stereotypes about the roles and expertise that women and men should have, it makes it rather difficult for women to get to positions of power within state or government. 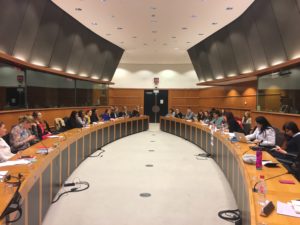 Additionally, gender diversity has not been considered a prestigious or powerful enough subject to fight for. Both men and women in politics tend to not go beyond repetitive declarations or support of a sustained engagement in the battle for gender diversity and equal opportunities. This might be because of various reasons, among which the fear of being further excluded from other ‘more political’ issues. Therefore, under the current circumstances,  if women are to be seen in the leading positions in the future, further conversation and action is required on the matter.

Therefore, these and other issues were discussed on 27 March 2018 under the topic “Empowering Women Requires More Women in Power”. The discussion was hosted by two members of the European Parliament: Ana Gomes (S&D) & Danuta Huebner (EPP). Claudia de Castro Caldeirinha, the co-author of  the book “Women Leading the Way in Brussels”, was part of a round-table discussion built around the findings presented in the book.