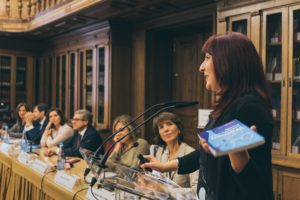 On May 29th 2018 our Executive Director, Claudia de Castro Caldeirinha was invited to discuss her co-authored book “Women Leading the Way in Brussels” (Caldeirinha & Hörst, John Harper Publishing, 2017) at the Portuguese Parliament, in Lisbon. The TV interview can be found here, in Portuguese.

The event started with a welcome and an introduction by the “Master of Ceremonies” Margarida Pinto Correia, Director of Social Innovation of the EDP Foundation, following an opening statement by Eduardo Ferro Rodrigues, President of the Portuguese Parliament. Following a presentation of the book, the event continued with a panel discussion on the topics of “Power, Performance, and Innovation: how a greater gender balance at the leadership level is fundamental for Portugal, Europe, and the world of the 21st century.”

We would like to extend our gratitude to our partners, co-organisers, speakers, the Assembly of the Portuguese Republic and everyone who attended this event. For information regarding the event in Portuguese, please check our photo album in Facebook and/or click in the press release here: Comunicado de Imprensa_Lançamento do livro Women Leading the Way in Brussels_AR, 29 maio 2018, 18h