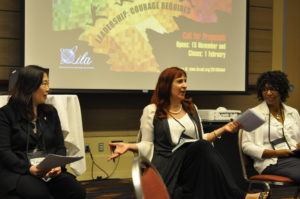 The subject of this panel, “Women and Authentic Leadership: moving through cultural barriers to facilitate positive change” was tackled by three senior leaders from the United States, Japan, and the Europe Union: Joanne Barnes, the Dean of  Indiana Wesleyan University Graduate School from the US, Takako Butler, one of the rare women Senior Managers in the Japanese car industry, from Fortune 500 ITOCHU Automobile, and Claudia de Castro Caldeirinha, Senior Leadership Advisor, Author, and Director of Redscope Consulting in Europe. The 3 leadership experts shared their research and experience in how authentic leadership builds legitimacy for women in (or aiming at) leadership while being a catalyst for positive change across cultural barriers. Like other leaders, women are challenged to be authentic leaders, but often do not appear as leaders in the same way as men. The speakers, all exceptional leaders in their own field, contributed to an effective panel with their different approaches.

Takako Butler, used a captivating “100 monkeys” analogy to convey her message. She told the following story:  100 monkeys were eating their food and fruit dirty, until one day one monkey, after seeing humans doing it, decided to start washing its fruit. At first, the other monkeys thought that monkey was crazy, but they soon realized that washed fruit was much tastier and healthier, and understood that washing their fruit was the best decision. Other monkeys joined the first one and also started washing their fruit before eating it. This brief educational story was used by Takako Butler to metaphorically show that leadership is about being “the first monkey”, or one of the first monkeys. In other words: be courageous enough to lead, be different and innovate, no matter how uncomfortable it may feel at first.

Many will be able to relate to the metaphor, no matter where you come from, as confirmed by another panel speaker: Joanne Barnes. Joanne is the chairwoman of the ILA’s Women’s Leadership Committee and has an interesting background in business and academia. As an African-American she encountered intersectionality, multiple forms of discrimination,and emphasizes that although we have common barriers and different cultures, we are globally seeing the emergence of new types of leadership among men and women. Although she is aware of a trend of toxic leadership in the world, Joanne focuses on the brighter side of our future, which is the growing awareness and creation of business trends around authentic leadership.

The European perspective, represented in this panel by Redscope’s Claudia de Castro Caldeirinha, who was also the panel facilitator, confirmed that countries may be on the opposite sides of the world but the similarities across cultures are constant. Leaders in the politically charged Brussels environment are normally expected to understand the challenges of the numerous and often disconnected possibilities; to dissect multiple cultural codes. In this context, there is more than ever a need for authentic leadership. But in a multi-cultural context, authenticity comes with challenges because what is accepted in one culture might not be accepted in another. So, the big question is how to lead authentically while taking into account the context and different multi-cultural perceptions.

Whether we examine the topic at the corporate, community or at a country level, authentic leadership and the way we want to build it, first has to include men and women, secondly always consider the consequences it will have and finally be consistent with our values and our objectives. The goal of leadership is to help us achieve those objectives, while taking into account the common good and our collective interests.