Who is Ana Gomes? She is undoubtedly one of the most influential women in Portugal. In her country of origin, and in many other places, she is known as a woman who never fears to speak up and voice her opinions. She is a champion of human rights & democracy who has never stopped fighting for what’s right.

Redscope’s CEO, Claudia de Castro Caldeirinha, met Ana Gomes 20 years ago in East Timor when Claudia was a young UN employee. At that time, Ms. Gomes was the first Ambassador of Portugal to Indonesia and actively contributed to the process leading to the independence of East Timor and the establishment of diplomatic relations between Portugal and Indonesia.

Later on, in 2004, their paths reconnected in Brussels when Ms. Gomes joined the European Parliament as a Socalist MEP, where she stayed for 3 mandates. During that time, Redscope & her worked together on many occasions in order to promote and defend several causes related to women’s rights. Moreover, Ana Gomes was one of the women that shared her tips & recommendations in the book: Women Leading the Way in Brussels, which have proven precious to many women aspiring at a political career.

In 2020, she officially announced her candidacy for the 2021 Portuguese presidential election. She finished second, with 13% of the votes, the best result ever achieved by a woman in a presidential election in Portugal. And even now that she is retired, she is still actively engaged in politics, always defending what’s right: from migration and gender issues, to environmental challenges. Always liaising with civil society organisations and the citizens to give voice to those who don’t have one.

According to Claudia de Catsro Caldeirinha, there are 3 words that summarise her path & define her:

3 lessons learnt from our CEO’s longstanding mentorship with Ana Gomes:

1-     Always be yourself. Choose your leadership style and believe in it.

2-     Be resilient, patient and committed to what you believe in. 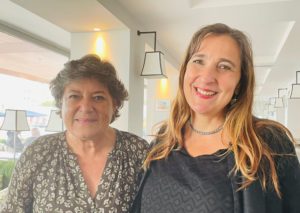